Value Proposition: 4 Steps to Create One (and win) 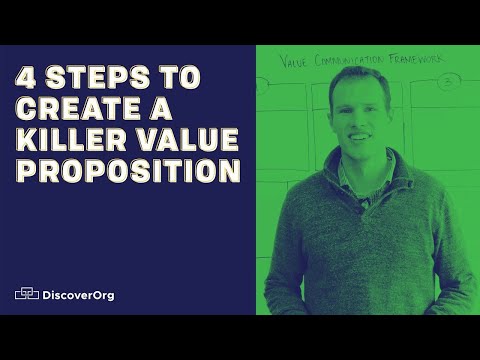 Justin: For starters, let’s talk about what value is what value isn’t. Quite simply put, value is the financial benefit that you get in excess of the price that you pay for a solution. If you’re evaluating a solution that costs $30,000 and when you implement that solution, you expect to get $300,000 in incremental revenue, the value that you receive is $300,000 minus $30,000 or $270,000. This is an important principle to understand when you’re selling to a prospective buyer because they’re going to be evaluating a number of different providers in the process, and they’re going to be providing a number of different value stories. The more clearly you can communicate the financial reward that they’re going to get in excess to the price they will pay, the more effectively you’re going to communicate the value. Let’s talk about what value isn’t. Value often is described as more features for less money. The problem with this definition is that the value that you receive from a solution is not in the input or what you put into the solution.

It’s what you get out of it. Like I said, it’s the financial benefit. We often have this misunderstanding of what value really is because of the way that it’s talked about in terms of when you go to the grocery store and you get a good value or when you get a good value from all the stuff that you got within the package of some offering. That’s what value isn’t. With that understanding of what value is and what value isn’t, let’s transition to how you can communicate value effectively. The first principle in our value communication framework is defining the problem, and this is one of the most important steps and often overlooked steps in communicating value. People often skip right to the second step, which we’ll talk about in a minute, but establishing the problem is number one. There are two parts to establishing the problem. The first is making the problem vivid. The second is tying a financial cost to the problem. Let’s take an example of this. A very poor example of communicating a problem is saying, “Joe, your sales reps are spending too much time researching their prospects.” “Oh, I didn’t know that.” Here’s a better way of doing that.

“Joe, have you ever walked the sales floor and noticed that it’s just dead quiet?” There’s nothing more frustrating as a sales leader to get out and see that none of your sales reps are on the phone, and I’m sure you’ve been in this situation before. You walk out there. It looks like they’re busy. They’re pushing around buttons on their computer. They’re typing. They’re bouncing from website to website, from their email to news sites, trying to learn a little bit about their prospects before they call them. “They spend all of this time in prospect research, just to spend a few, short minutes on the phone, and this should be a scary proposition for you, Joe, because every minute they spend in research is a minute that they’re not spending on the phone.” If you think about how much you’re paying these sales reps, typically, between $60,000 and $80,000 just in base salary a year, that’s $15,000 to $20,000 if they’re spending two hours a day conducting research, and you’re paying that amount for the research that they’re conducting. This is a very real problem that has very real costs tied to it. Today, we’re going to talk about step two, the solution to that problem.

Now we all know that sales reps are trained to sell a solution and most often, where they focus their energy is on the features of a solution. While this is important, it’s not where the bulk of their energy should be spent. If you think about features, features are the aspects of a product that deliver the value. A feature might be “We have dual plug ,” but what the heck is a dual plug and what benefit does it actually provide? Sales teams need to spend more time focused on the actual benefit, the “so what” of the dual plug and what it actually provides. An example of this is one of the features of the DiscoverOrg platform is that we offer direct dial phone numbers. What does that mean for you? That means that when you get on the phone and you start to dial your prospects, you’re going to spend less time dealing with gatekeepers. You’re going to spend less time trying to navigate the corporate switchboard and ultimately, you’re going to make up to three times as many connections in an hour of prospecting than you would without the DiscoverOrg direct dial phone numbers.

The third thing that you need to do effectively is to differentiate. What I mean by that is you have to know why your product is different than all the other products that are out there in the market. This is probably the single most important thing you do in setting up the communication of value because at the end of the day, your buyers are going to have met with multiple providers along the way and they’re going to have evaluated all these different solutions and the only thing that they’re going to remember is what’s different, so you’ve got to know how your product is different. DiscoverOrg, for example, provides more direct dial phone numbers than any other provider on the marketplace. DiscoverOrg has a team of 250 researchers that is conducting primary research on our data and verifying it from end to end, and that’s different from the other providers in the marketplace that are using crowdsourcing or data aggregation on the web that you can’t get the granular actionable insights that a real live researcher can get from a phone conversation or a survey about the solution purchasing habits that are coming up for a particular organization.

That’s how you illustrate differentiation. You’ve got to know how you’re different, and that’s what the prospect’s going to remember at the end. The third step is the value or the result from the solution, and there are two parts to that. The first part to communicating the value is the value driver. You have to communicate and understand what’s driving the value for the deal. In the case of DiscoverOrg, because you’re going to be talking to more prospects in a given hour, you’re going to book more meetings with those prospects. If every sales rep that your organization booked just one more meeting per week, that would result in 50 more meetings per year and with 50 more meetings per year, on average, 10% of those are going to close to one deals.

Five more wins a year. What does that mean for your organization? The second piece of it is the actual value or the ROI. If you know that five more deals are going to close because of the meetings that you book, then you know, based on their average sales price, what that’s going to result in, so there’s some dollar figure associated with those extra wins. Maybe it’s $100,000 per rep. Those are the three pieces of effectively communicating value that you set up the payload with, and the payload is really step number four here and that’s the story. The story brings it all together, and it’s not just any story. It’s a story that incorporates these three points: the problem, the solution, and the value, but it’s for a specific example of a customer that you have or if you don’t have any customers yet, it’s for an example of how this has worked for others in another industry.

Let’s talk about a case study or a story from DiscoverOrg. We work with a company called AVI-SPL, and AVI-SPL is the global leader in audio/video solutions. AVI-SPL wanted to implement an account-based marketing strategy, but one of their big challenges was that they didn’t have the contacts that they needed at their target accounts, so they purchased the IT North America and Europe data set from DiscoverOrg, which gave them detailed org charts on all of the buyers at their target accounts and the specific functions and departments that they were looking at. As a result, they saw an increase of $million in revenue. They generated 12,000 leads, which led to an additional $million and pipeline created and overall, they boosted revenue by 5% through implementing an effective account-based marketing strategy with DiscoverOrg’s data, and “That’s the kind of result that I know, you, Mr. Prospect, can see from our solution.” In closing, if you find yourself competing on price, then you failed to effectively articulate value, but I promise you that if you will go through each of these steps in your process of selling and marketing value by describing the problem effectively, communicating how your solution delivers key benefits that are different from other providers in the marketplace, and then communicating the tangible financial value that a prospect will get from your solution, and then close with a powerful customer case study example of how one customer had a specific problem that you solved it and deliver that value for them, I promise you that if you do that, you will be able to effectively articulate value and when it comes to discussing price, there won’t be a discussion about why your premium price is too expensive because the customer will understand why it’s worth it.

What I want you to do is take this back. Whether you’re in sales or marketing, apply it to an email that you’re writing or website copy or maybe it’s a pitch that you’ve been working on with your prospects or your customers. Go back and practice it again and again, and I promise you that as you do that, it will become more natural to just speak this way. You’ll find it difficult to focus on things like features because you know how important benefits and differentiators are.

I hope you like this session on Whiteboard Wednesday. If you have any comments, go ahead and leave them for me below. Thanks, guys. .

Value Proposition: How to Write a Good One | The Pe:p Show