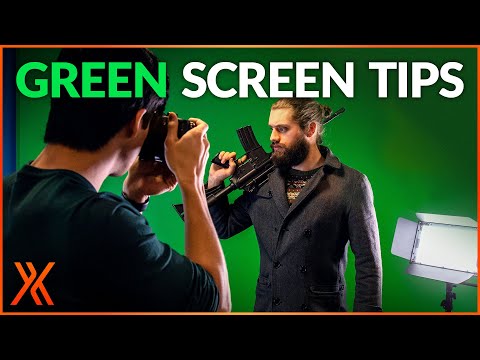 So you’ve filmed your subject against a green screen, and you’ve successfully brought it into HitFilm and keyed out the green. But you’re not done yet- the composite looks flat and unrealistic. Today we’re taking a look at my top 5 tips for making your green screen composites more convincing. Tip number five: where possible, add camera motion. A stable shot on a tripod has no parallax or movement, and that makes it much easier for the audience to see where your shot ends and the background begins. Now, this does make the compositing process more difficult, because you have to match the camera movement in 2D or 3D space, but the payoff is a more realistic shot. If in doubt- film two scenes, one locked off and one with movement. If you’re unable to properly track the motion in post, you can always fall back on the non-moving shot. We shot our scene with a DJI Ronin S gimbal. Notice the orange tracking markers I made with tape- otherwise, it’d be difficult to track a flat green wall.

Tip number four has to do with color matching your plates. Whether you use the Grading Transfer effect, Curves, Color Balance, or any other of our color grading tools, the color between your two plates should look like they exist in the same space. This includes black and white levels as well- pay attention to your color scopes and make sure nothing is too extreme. If you’re not sure where to begin making changes, try paying attention to only one section at a time. For example, first compare the shadows of each plate. Are they the same color and brightness? Is one tinted slightly more purple or red? Once adjusted, move on to the midtones, then the highlights. Tip number three involves the Light Wrap effect, which is available in both HitFilm Pro and Express. This effect works by taking the color and light from a layer you select, and wrapping it around the edges of your actor. However, the key here is not to overdo it; your audience should not notice the light wrap.

Keep it subtle enough to go unnoticed, but strong enough to make a difference. Try layering up two or three Light Wrap effects of varying intensities and Radius settings for a more realistic falloff. Tip number two is layer up. If you just have two plates: your actor and your background, the audience will be able to tell where each one begins and ends. So blend them together by adding extra elements. These can be atmospherics like smoke, embers, rain, or light flares overlaid on top. This helps fill the space in between the two plates and gives the audience more to look at.

My number one tip is to do your best to match the environment your actor will be in, prior to hitting record. This includes the lighting, which is the most important, and any wind or rain going on in the scene. Of course, this requires knowing what the background will end up being before you start recording. In my scene, I knew that I wanted Oli to be backlight by the moon, so I made sure to set up a white light positioned behind his right side. I also knew that he would be standing in front of a fire, so I had Gavin flicker another LED offscreen that had an orange gel. And there you have it- you’re ready to start putting your actors into whatever location you can imagine. Last week we showed you how to actually key out the green in HitFilm and you can find that video here. Let me know if you have any questions and I’ll see you all in the next video. .

How to convert 2D images into 3D scenes