The second beast is appropriately called the false prophet (Revelation 16:13, Revelation 19:20, Revelation 20:10) because he will deceive people with signs and wonders in the sight or presence of the first beast, which means he will work under the influencing power and authority of the first beast. The signs and wonders performed by the false prophet include calling fire down from Heaven, which is a sign typically attributed to God, as discussed in the last section.

While false religion is often filled with superstition and perpetuated through demonic signs and wonders like voodoo or witchcraft, the signs and wonders in the Tribulation, including those performed by the false prophet, will be so great that even believers will have a hard time discounting them:

“Make an image”: This refers to replication of Antichrist that is related to the throne he will erect during the abomination of desolation, halfway into the Tribulation period. This will happen in the Jerusalem temple when Antichrist abolishes the former false world religion and seeks to have people worship him alone as god (compare Dan. 9:27; 11:31; 12:11; Matt. 24:15; 2 Thess. 2:4). The false prophet and Antichrist again will deceive the world with a clever imitation of Christ, who will later return and reign from the true throne in Jerusalem.

People open themselves up to deception when they rely on their experiences in life instead of the truth in God’s Word. Since God’s Word shows us that the enemy can use signs and wonders as a tool for deception, we must “walk by faith, not by sight” (2 Corinthians 5:7). Those who reject God’s Word will become subject to deception and worship false gods and practice lawlessness in willful ignorance:

Matthew 7:21-23 – “Not everyone who says to Me, ‘Lord, Lord,’ shall enter the kingdom of heaven, but he who does the will of My Father in heaven. Many will say to Me in that day, ‘Lord, Lord, have we not prophesied in Your name, cast out demons in Your name, and done many wonders in Your name?’ And then I will declare to them, ‘I never knew you; depart from Me, you who practice lawlessness!'”

Signs and wonders can become a stumbling block, even for believers, as shown in the passage below:

Acts 8:9-12 – But there was a certain man called Simon, who previously practiced sorcery in the city and astonished the people of Samaria, claiming that he was someone great, to whom they all gave heed, from the least to the greatest, saying, “This man is the great power of God.” And they heeded him because he had astonished them with his sorceries for a long time. But when they believed Philip as he preached the things concerning the kingdom of God and the name of Jesus Christ, both men and women were baptized.

Acts 8:13-17 – Then Simon himself also believed; and when he was baptized he continued with Philip, and was amazed, seeing the miracles and signs which were done. Now when the apostles who were at Jerusalem heard that Samaria had received the word of God, they sent Peter and John to them, who, when they had come down, prayed for them that they might receive the Holy Spirit. For as yet He had fallen upon none of them. They had only been baptized in the name of the Lord Jesus. Then they laid hands on them, and they received the Holy Spirit.

Acts 8:18-24 – And when Simon saw that through the laying on of the apostles’ hands the Holy Spirit was given, he offered them money, saying, “Give me this power also, that anyone on whom I lay hands may receive the Holy Spirit.” But Peter said to him, “Your money perish with you, because you thought that the gift of God could be purchased with money! You have neither part nor portion in this matter, for your heart is not right in the sight of God. Repent therefore of this your wickedness, and pray God if perhaps the thought of your heart may be forgiven you. For I see that you are poisoned by bitterness and bound by iniquity.” Then Simon answered and said, “Pray to the Lord for me, that none of the things which you have spoken may come upon me.”

God is always interested in the intent of the heart. Allowing signs and wonders that might even deceive believers serves as a test of the heart, as discussed in the last section. Saints of all dispensations must rely on God’s Word and the leading of the Holy Spirit instead of following their experiences and their own hearts to pass the test, even if the signs and wonders are difficult to discount with the physical senses.

While Satan has power to generate signs and wonders through his earthly agents, he still has his limits. In the plagues on Egypt, Pharaoh’s magicians turned rods into snakes, turned the water to blood, and caused a plague of frogs like God, but they were unable to copy the plagues after the frogs, and even conceded that God was more powerful than they were:

Exodus 8:18-19 – Now the magicians so worked with their enchantments to bring forth lice, but they could not. So there were lice on man and beast. Then the magicians said to Pharaoh, “This is the finger of God.” But Pharaoh’s heart grew hard, and he did not heed them, just as the LORD had said.

Incidentally, the last counterfeit plague performed by the Egyptian magicians and the last lying sign and wonder of Satan through the two beasts both involve frogs and are the only two places frogs are found in Scripture: 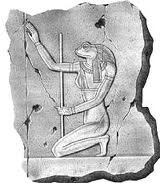 Some believe that each plague against Egypt served to defeat and judge their gods and show that the God of Israel was the one true God (source). The Egyptian goddess Heqet had the head of a frog and was the fertility goddess of birth and resurrection (source):

“In the Egyptian pantheon the goddess Heqet had the form of a woman with a frog’s head. From her nostrils, it was believed, came the breath of life that animated the bodies of those created by her husband, the great god Khnum, from the dust of the earth. Therefore frogs were not to be killed.”

As we will see in Revelation 13:15, the false prophet is able to give “breath” to animate the image of the beast similar to how the goddess Heqet supposedly animated bodies with her breath. But in the end, the last of the magician’s counterfeit plague of frogs in Egypt show that Satan’s power is limited and these deceptive signs are no match for the power of God Almighty!

Copyright Disclaimer under section 107 of the Copyright Act of 1976, allowance is made for “fair use” for purposes such as criticism, comment, news reporting, teaching, scholarship, education and research. Fair use is a use permitted by copyright statute that might otherwise be infringing..

IMPORTANT
We are now living in the absolute End Times as per biblical prophecy.

Our Lord Jesus Christ – King of Kings. 2nd Coming and return is IMMENENT!.

Please do not waist another a minute.

No matter what religion you serve, there is only one God.

If, you want to be assured that you will not have to endure the perilous times that will befall you.

Irrespective, of what sins you may have committed at any time of your life. If you humble yourself and ask for God’s forgiveness. He will forgive you and wash them all away and welcome you as his beloved son or daughter with open arms.

If you are not a child of Father God or have not asked Jesus Christ to come into your life yet?

I implore you to do this without delay.

Read this prayer of Salvation and ask God to forgive you now and accept Jesus Christ as your Lord and Saviour and you will be assured of eternal life.

6 videos
Video Web Tube. News provides 100's of quality LIVE video and article news updates on a range of exciting and interesting topics. We stream these video news broadcast from live video channels like Youtube, Vimeo and others. Super exciting features and please feel free to Like, Share and take a look at the Video Channels, Playlists and Multi-Episode Series. We try our best to capture the closed captions and transcript of these videos and include these in our video news posts for easy reading. Video Web Tube. News is part of Video Web Media Agency. www.videowebmastery.co.uk

Biden Could Be FIRST President EVER To Be ARRESTED?! | (Slight Satire) | Breakdown | Huckabee

Amazing Robotic Animals – you have to see!

Why COVID Was the Best Thing That Happened to Me

Insane New Bike Inventions That Are on Another Level

Amazing Inventions That Are At Another Level

Incredible Inventions That Are On Another Level

US Attorney General William Barr reportedly on the cusp of resigning

newadmin
Video Web Tube. News provides quality video and article news updates on range of exciting and interesting topics. We stream these video news broadcast from live video channels like Youtube, Vimeo and others. We try our best to capture the closed captions and transcript of these videos and include this in our video news posts for easy reading. Video Web Tube. News is part of Video Web Media Agency. www.videowebmastery.com