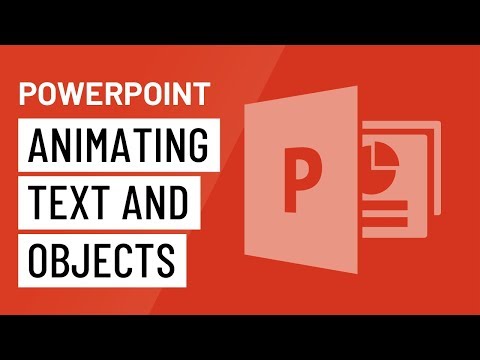 If you really want to add some excitement to your presentation, try adding some animations. PowerPoint has a wide variety of animated effects that can be applied to text and other objects. In this example, I’m creating a very basic quiz that has a question on each slide. I’d like to add animation to these two text boxes… and also the man on top of the moon. To get started, select the first object you want you want to animate… then go to the Animations tab. Next, click the drop down arrow to see all the available effects. There are four different categories: Entrance, which will happen when the object first appears… Emphasis, which happens while the object is on the slide… Exit, which will cause the object to disappear…

And Motion Paths, which will move the object along a path. I’m going to choose the one called Fly In, which is an Entrance effect. For some effects, you’ll have different Effect Options that you can choose from. As you can see, this one lets you change the direction. Let’s say I wanted to add second animation to the text. If we try to select one from the main menu, it’s actually going to replace the current effect. Instead, we’ll click the command that says Add Animation… and we can apply additional effects to the same object. You can always tell which objects have animations because they’ll have little numbers next to them—one for each effect. The thumbnail for the slide will also have a star icon. If you want to preview the effect, just click the Preview command any time. Now, the key to using animations effectively is moderation. Say we wanted to add an effect to the answer text as well. We don’t want anything too bold, like say the Swivel effect, because it might be distracting to the audience.

Instead, I’m just going to set it to slowly fade in, which should really help the answer shine. It’s also important to note that not every object needs an animation. This is especially true in more corporate or professional settings. In this case, we’re creating a fairly casual presentation—so I’m going to add one more effect to our little astronaut, but leave the rest of the slide alone. At this point, we have several animations to keep track of, so it might be a good time to open the Animation Pane. The pane appears on the right and lets you do a few different things. You can click and drag the effects to change the order that they play in…

And you can use the drop-down arrow to access even more options. By default, animations are set to start when you click the mouse, but I don’t want to have to do that for every single one. Instead, we can have some of them start automatically, either with the previous effect or after. I’m going to choose After for everything but the very first animation. That way, they’ll all play one after the other, as soon as we click the mouse. If you go back to the drop-down arrow… and then choose Effect Options from the menu… you’ll get a dialog box where you can really fine-tune the effect. Some of these options will vary depending on the specific animation you’re working with. For example, with this animation… we can set the answer to fade in all at once, one word at a time, or one letter at a time. I want a little bit more flair, so I’m going to go ahead and choose by letter. If we go to the Timing tab… we can adjust things like the speed of the effect and whether or not it repeats.

I’m going to add a tiny bit of delay to give the audience more time to think of the answer. And that looks perfect! Now I’m going to play the entire slide show so we can see the finished product. We’ll just click the mouse to trigger the first effect… which triggers the next one automatically… and then the next one. I really like the way the answer animation turned out, so I’d like to use the same one on the other question slides. Luckily, we don’t have to go through all the steps again—we can just copy and paste the effect from one object to another. First, select the object whose animation you want to copy… then click the command that says Animation Painter. Next, click whatever object you want to add the effect to… and now it fades in, in exactly the same way. We’re well on our way to creating a fun practice quiz. With just a few animations, you can turn a simple slide show into something interesting and engaging. .

How to Design Cartoon Character in PowerPoint

PowerPoint: How to Use Animation with Motion Paths and Custom Paths