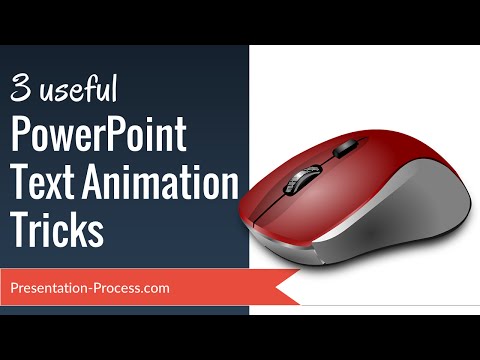 Hi! I am Ramgopal from presentation process.com. In this video, you will learn three useful PowerPoint text animation tricks that will allow you to hold your audience’s attention throughout your presentation The way we will go about learning this is – First, we will learn the basic text animation. The way it works is – first, the audience would be able to see just the title of the slide. You give a short explanation of the title. Then on the first click – you will have the first point appear. Then, on the second click – you have the second point appear. And then, the third and then the fourth. Since you control the pace of your presentation, you will be able to have much better grip on your audience, and your audience will listen to your presentation, rather than to go through the entire text and then lose their attention. After learning the basic text animation, you will learn a few tricks that will take this PowerPoint text animation to a whole new level. Here is the trick you’ll learn. As usual, you will have the title appear. Then, the first point appear.

Now, watch this as you present your second point the first point dims out. Then, the third point and the previous ones dim out. And the fourth point and the previous ones dim out. So, this is a beautiful way to focus your audience’s attention on the point you want to explain, rather than to have them read the previous text. So that is the first of the three tricks you’ll learn. The next trick you’ll learn is- instead of presenting the points from one to four you will learn how to present your points from the fourth to first. That is in reverse order.

This is quite useful especially when you want to build some excitement Let us say, you’re a salesperson and you’ve had a fantastic sales performance the last month and you were asked to give the reasons why you’ve been so successful. In such a presentation, I wouldn’t really want to go in a sequential order from 1 to 4 explaining the reasons why I have been successful. I would like to build a bit of excitement in the audience by going in the reverse order. First, I’ll tell the audience the fourth biggest reason why I have been successful. Then I’ll talk about the third biggest reason that has contributed to my success. Then the second and finally, the biggest reason why I have been able to achieve the kind of success I achieved the last month. Isn’t that a brilliant way to present your ideas? As you can see here, I’m not only presenting my point in the reverse order, but also, I am focusing the audience attention on the point I’m about to explain.

Now, that is the second of the three tricks you will learn. The final trick you will learn is – you not only will learn to present your points in reverse order, but’ll also learn how exactly to make your previous points vanish, as you present your next point. This way, you will ensure that your audience focuses entirely on the point you’re about to make, rather than read through the previous text.

Isn’t that beautiful? So, those are the three things that you will learn and they’re all very easy and you’ll be able to learn them in a couple of minutes. So, let’s jump right in and learn these three beautiful techniques of presenting your text. I’m going to start with this slide, where there is no animation. The first thing I’m going to do is – to go to the Animations tab – in PowerPoint ribbon and open the Animation pane. That way, you’ll be able to follow whatever I’m doing here. The next step is to add some form of entrance animation to this text. So, I’m going to click on the text, and as you can see here – there is a bounding box that appears, and I’m going to click on the bounding box. Next, I’m going to choose one of the entrance animations. As you can see here entrance animation is in Green, and that appears by default. Let us say, I want to use ‘Wipe’ animation.

So, I’m going to click on Wipe animation – and you can see instant preview of the animation here. Then, you can change the direction of the wipe. As you can see, the default wipe direction is – from bottom up, Now, I can always change the direction by going to this ‘Effect options’ and chosing ‘From left’ Now, this is more like the way that I want my text to appear. When I go to my slide show mode, I can see that on the first click – I have my first point appear then, on the second click – the second point appear and so on So, this is beautiful.

So, this is the basic way in which you will have your text animation happening. Now let us take this to the next level – by adding some effects. Now, let me go to the animation pane and if you see here there is a small arrow on the right, that I want to click. Then, I go to this option called – ‘Effect options’. Now, that opens up this dialog box. Here, we can do some alterations that will take our animation to the next level. Here, if you observe, there is something called ‘After animation’ it says ‘Don’t dim’. You click here in the small arrow and you will have this drop-down menu appear. Now, here you can choose the Font color after animation. So, here I am going to choose the light gray color. So, that is the color to which the font will change after the animation event gets over. So, let us say ‘Okay’ and Now, watch what happens here. On the first click, I have my text appear. On the second click the previous one gets dimmed out in the light gray color. The color that we have just chosen.

So, that is how we did the first of the three tricks. Now, let us learn the reverse order technique. I once again go to the animation pane and I’m going to open the ‘Effect options’ – as I did earlier. Now, if you see there are three Tabs here in this dialog box. The one that I’m going to choose is – this one called as text animation. As soon as I click on that one you can see that the menu opens and here I’m going to choose the option called – in reverse order. So, as soon as I click on that – you can see that a check mark appears, and I say OK now. Let’s go to the slide show mode. On the first click, my fourth point appears instead of the first one. And then, on the next click – I have the next one appear, which is the third point, and then, it goes in the reverse order. So, that is how you do the reverse order technique. Now, the final technique that I showed you – which is about making the text disappear on the next click.

So, let us go to the same ‘Effect options’ and let us go to this option called ‘After animation’ in the ‘Effect’ tab Let us go down. And here, you see the option called – ‘Hide on next mouse click’. So, I’m going to click on that one and say OK. Now, let’s go to the slide show mode, First, I have the fourth point appear. Then, I have the third point appear, but the previous one has disappeared. The same way, when I click on the next one, my next point appears and the previous one has disappeared. So, that is how you can play with the text animation.

I hope you really enjoyed the three powerpoint text animation tricks you learnt in this video. As a thank you for watching the video this far, I have put together a useful Mini training called – ‘Learn five simple animation tricks under five minutes to make your slides clear and memorable’. this is a useful training program, if you are a business presenter. Like say, you are a business owner, a business executive, a trainer or a consultant. You can sign up for this free ‘Mini training program’ by clicking on the link here. You can also sign up for the Mini training by clicking on the link in the description area right below this video. So, go ahead and sign up for the ‘Mini training’ and I’ll see you there. .

How To Create A PowerPoint Template: Placeholders, Footers & More (2 of 3)