How to light a 3D scene in HitFilm 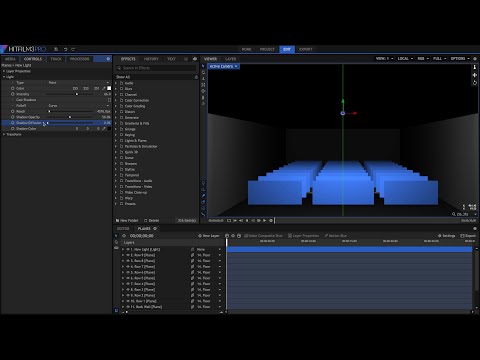 When filming a scene, few things are as important as good lighting. Similarly, when working in HitFilm’s 3D compositing environment, lighting is an important and powerful tool. I’m Axel Wilkinson for HitFilm.com, here to explain how to use lights in Hitfilm 3 Pro. Light layers in HitFilm will only affect 3D layers in your composite shot. I’m using some very simple planes in this example, to keep it clear exactly what is happening, but the principles apply equally in any project, whether simple planes or a procedural cityscape of 3D models as particles. There are no lights in this scene yet, so everything is illuminated very evenly. Without any highlights or shadows, we can see everything in the scene, and it renders quickly, which is nice for arranging our various objects.

But we can also create light layers from the New Layer menu, to dramatically light our scene. So, observe how the lighting in our scene changes when we create a new light. In the Controls panel for the light layer, open the Light section, and we can look at the different Light Types one at a time. First, we have Ambient. There only two controls for ambient lights: Color, and Intensity. You can change the color if you wish to tint the light. For example, open the color picker and select red, and our entire scene is tinted red. The default white setting provides more accurate, natural colors. You probably noticed that our scene is brighter with the ambient light, which brings us to Intensity. We can turn the intensity down to reduce the brightness of our light.

When you have multiple lights in the scene, a low intensity Ambient light works well as a fill light, to ensure that everything in your scene is visible. There are no other controls for ambient lights, they don’t even have Transform controls, because they are essentially everywhere. There’s not a point the light is emanating from, it’s shining on every object in your scene from all sides. Thus ambient lights do not create shadows. A Point light, which you might recall was the default type, is similar to holding a naked lightbulb in your hand.

Or the sun. The light shines out in every direction from a specific point. Our walls and planes are illuminated differently, based on their angle and position in relation to a point light. We also have some new controls for the point light. Cast shadows is the master control for whether or not this light will create shadows among other objects. We will come back to shadows in a minute. Falloff describes the behavior where the further light travels from it’s source the dimmer the light gets. When Falloff is enabled, Reach sets the distance beyond which the light will have no effect at all. To better understand the falloff options, lets look at this chart. So, with Falloff set to None, the light stays the same intensity matter how far it travels. It’s not how real lights work, but it is convenient for lighting a 3D scene, because you don’t have to worry about how close the lights are to the other objects. With Linear falloff, the behavior can be described by a simple angle.

As you get farther away from the light source, the intensity of the light decreases. At twice the distance you get half as much light. Curve falloff gives the most accurate simulation of real lights. The curve which gives this type of falloff it’s name follows the inverse square law, which you can look up if you want more technical information on it. But basically, every time your distance from the light doubles, the amount of light you receive is quartered. It’s a little bit more confusing than the linear falloff but the simple version is that the light is much more powerful at close distances.

Let’s compare these types of falloff now, in HitFilm. With Linear, notice how the more distant planes receive progressively less light. Our reach is currently set to 1000, so within 1000 pixels the light is gone entirely. But we can increase the reach to extend the range that that light will travel. As we switch from linear to Curved, the more distant planes receive even less light. The difference between curve and linear is subtle, but if you’re trying to replicate real lights as accurately as possible then curve falloff should be your weapon of choice. Shadow Opacity and Shadow Diffusion control the appearance of the shadows created by the light. But to get shadows at all, we need to enable Cast Shadows.

Now we need to define which layers should cast shadows as well. Select Row 1, open its Materials, and here we have a toggle for whether the layer will cast shadows. Enable that toggle, and we get realistic shadows being cast from this layer onto the floor and walls. Switch back to the Light layer, and we can use Shadow Opacity to adjust the darkness of the shadows. Shadow Diffusion adjusts the softness of the edge. Shadow color is probably self-explanatory, you can select the color of your shadow. Sometimes shifting the shadow color a bit toward the color of the object that is receiving the shadow can improve realism. A Spotlight creates a directional cone of light, and Cone angle changes the diameter of the spot.

Feather controls the softness of the edge of the spot. The transform properties are essentially the same as any other 3D layer in HitFilm, except… In the layer properties, set the Alignment to Towards Target Position, and a new Transform property appears: Target. If you have a directional light type selected, such as spot or directional, then you can use the Target property to shine the light on a specific location. Notice now, that as we move our light, it always stays pointed toward that target position. Our final type of light is Directional, which doesn’t exactly have a real-world equivalent. It creates an infinite plane and light is emitted in one direction from that plane. So all of the objects in front of the plane receive light from the same direction. Directional lights automatically use Toward Target Position, so we define a Target, and then the line between the light position and the target position defines the angle at which light will hit every object in your scene. So, those are the different types of lights, and their controls.

We can also adjust the way each layer interacts with different light types, by editing the layer Materials. Our next tutorial will look at the Materials controls for different layer types. Thanks for watching, and I hope you come back for that tutorial as well. .