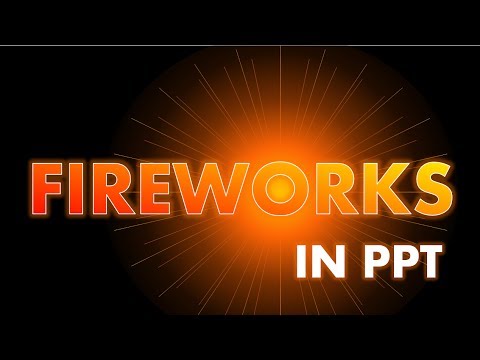 Hello again! Here’s how to make this bursting firework effect in PowerPoint. As always, there are 3 easy steps. Make the firework, make the tail, and animate the firework. Let’s jump right into #1 and learn how to make the explosion part. And let’s give it a white background so you can see all the colors including the black. The firework is made up of 3 different pieces. I wasn’t sure what to call them, but for simplicity, let’s just call them the circle, the large flare and the small flare. I’ll show you how to make each of these, and then we’ll combine them all together. Let’s take a look at the circle first. This is basically just a circle shape with a gradient effect. Let me show you how I colored it in. So we have a radial gradient that starts from center. In terms of the colors, the first one is the innermost color, and it’s yellow. Next, we have orange at the 19% position. Now you don’t have to have it exactly at 19%, that was just the position I landed on when I was doing this.

You can have it higher or lower — whatever you like. What’s more interesting here though are the 2 colors on the right side, which are both black. The right-most color actually has 100% transparency. Then the other one is at 90% transparency and is in the position of 78%. And again, you don’t have to have it at exactly 78%, but that’s just what worked for me. Next, let’s go to the large flare, which is actually a 24 point star, as you can see when I move the adjuster there. You can get this star by going to Insert  Shape and choosing it from the menu. You can then adjust it like this. If you don’t have this shape in your version of PPT, you can always just create 12 intersecting lines to get a similar effect. Now let’s see how this is colored in. Basically the orange part you see is just the shape outline. There is no fill, so you’re just working with the line, which is .5 in weight and just the default settings for everything else.

See, if I change it to red, it changes everything to red, which confirms that there’s no fill. Ok let’s go to our last piece, which is the 32 point star. It’s the same thing here — you can get it from the Shapes menu and adjust it to look like ours. It has the same settings as the other flare, except it’s a darker color. If you like, what you can do though is adjust the width of the line to add some style — you can’t really see the difference now but you might if I zoom in here.

So you can adjust that — the width of the line — up or down as you like. So just play around with that and see what width you like for the 2 stars, or flares. Great, now it’s time to put them all together, make sure the circle is on top. Let’s make the background black again, and we’re ready for the next step, which is making the tail. Let’s just delete the top to focus on the tail, and it’s really easy — it’s just a rectangle with a gradient fill. I’ll show you what it looks like. Here we have a linear gradient with a 270 degree angle. For the colors, the black is 100% transparent, the orange in the middle is 30% transparent, and the yellow/orange at the top is not transparent at all. The other interesting piece you can add here is an outline with a cool dash effect. Again, play around with these — you’ll use different ones, different dashes, different outline styles, depending on the width of your tail. For the fireworks in my video, for example, I originally had the tails at .03 — but when I originally compressed the video, somehow one of the tails wasn’t showing up, so I had to remake all of them to be .05 in width instead, and then they all worked.

So .05 is the width of the tails in my video. So that’s all for this step, let’s get to the fun part of animating it all. The animations aren’t too complicated either. The firework part has 3 animations, and the tail has 2. But before we do anything else, let’s just group the firework pieces and put that together with the tail. Let’s now animate the firework. We’ll go up to animate and put a “zoom” entrance, a “grow/shrink” for emphasis, and finally, add a “dissolve out” for our exit effect. For the tail, we add a “wipe” entrance and “random bars” for the exit effect. Now we make everything .25 in duration, as well as “start after previous.” Now take the entrance for Rectangle 6, which is our tail, and move it to the front, and take the exit of the tail (rectangle 6) and move it right after the entrance of the firework, then change it to start with previous.

So this is what the final pattern should look like for it to work properly. And here is the final result, and let’s zoom and see it again. And there you have it — another new trick to add to your toolkit. I’d encourage you to really play with different ways to both design and animate this, since fireworks can be done in so many different ways. Maybe you’ll discover a technique you like even better than this. Thanks again for watching — check out my other videos if you haven’t already, and I’ll see you for my next one! .