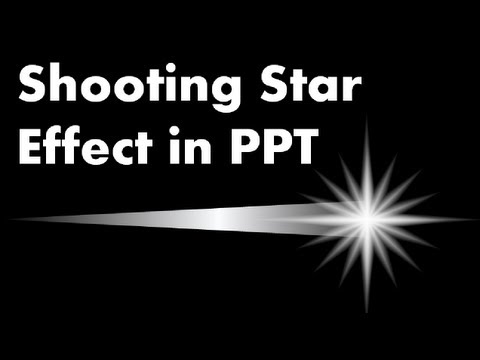 This is what I call the “Shooting Star Effect” in PowerPoint, and I’ll show you how to make it. Step 1 is to make the stars. Step 2 is spin the stars. Step 3 is add motion paths. Ok let’s begin. The shooting star actually consists of two separate stars that are layered on top of each other. The first is a 16-point star (but you can, of course, experiment with other types of stars). The second one I’m going to use is a 4-point star – and you can adjust the points to be fatter or skinnier as you like. Now let’s color them in properly, starting with the 16-point star. Start by going to Format Shape and let’s remove the outline so that’s out of the way.

Now to go Fill, Gradient, and make it a path gradient – and let’s reduce it to just two colors. Make the inner color white, and now let’s make the outer color white as well, but we’ll make that one 100% transparent. And again, you can experiment with other colors as well but I really like the white-on-black look. And let’s just use the Format Painter to make the 4-point star match as well, and you can play around with how fat or thin the points are. And now we’ll just layer one on top of the other so they’re exactly lined up. Ok, so now we’re all set and ready for the next step, which is spinning the stars. For this, I’ll just start by separating them again so you can see the difference in spin. The 4-point star will spin in the direction of the motion path, so I actually like to spin it clockwise.

And that’s what we get here. I know the quality isn’t great with the preview, but it’ll look better once you try it out for yourself. Ok, well that’s it for the star and spins, so now we’re ready to add the motion paths. For this step, I’ll just make the stars a little bit smaller so you can see the motion path a little bit better. Now I’ll pull the star to the side so it can go across the screen.

When adding motion paths, make sure you have both stars selected. And then go to the motion path selections – and we want to add a basic line for now. Just adjust the line to go across – make sure that both motion paths are lined up exactly on top of one another. Make it start with previous and slow it down a little bit. And here’s what it looks like! Now for another example, let’s remove those motion paths, and we’ll go in and this time we’ll add a custom path.

Draw it in how you like, slow it down, and here it is! See you get that bouncing effect there. Ok, again, let’s remove that path, and this time, I’ll show you how to make an angle – that is, when you want to go straight in one direction, then straight in a different direction. For this, we’ll start again with the line path. And let’s have it go up and then drop down sort of in the middle of the screen. And again line both paths up with each other. Now we’ll actually repeat the process exactly so you get two more motion paths going down. But this time, we’ll grab them and place them right underneath the first two. Drag them down off the screen. Now make the first two start with previous and make the second two start immediately after them. And this is what you get! Ok well that’s basically it for how to do the shooting star effect – thanks again for watching, let me know what you think, and see you again soon!

How to Create Spotlight Effect in PowerPoint Easily